On the broadcast of my Twitch.tv/vul100 stream, tea leaves under black light revealed their many hidden beauties. Here are some images taken from that stream.

To highlight what you can see with UV light, here the same Ali Shan leaves under regular and black light:

On the left you can see gradations of green to yellow, but under black light on the right, the same leaves burst with color. Red corresponds to chlorophyll, yellow and green correspond to a number of different compounds, primarily the grassy and jasmine derivatives of membrane fatty acids, but also amino acids, aldehyde compounds with a floral quality such as phenyl acetaldehyde, and the furfurals, such as 5-methyl furfural with its sweet caramel-like aroma. The dark purple corresponds to the larger polyphenols, such as theaflavin and thearubigen, and potentially other compounds that are produced by heating the leaves.

Incidentally (for those of you interested in chemistry), I went through my collection of tea aromas to determine which ones lit up under black light and which ones didn't—in general, alcohols such as the rose-smelling 2-phenyl ethanol and benzyl alcohol did not, while the corresponding aldehydes (phenyl acetaldehyde and benzyl aldehyde) did, with colors under black light being variations on yellow.


The red color corresponds to chlorophyll and the more purple to the polyphenols. What was perhaps more apparent to the naked eye than in these photos was that the sous-vide retained more of its chlorophyll while the leaves of the pan-fired tea were overall more purple.

(Parenthetically, "polyphenol oxidase" is plural above because the leaves actually have two forms of the enzyme.)

The outer wrapping of the buds is red from chlorophyll and purple from the polyphenols, while inside the trichomes are yellow, thanks to the floral compounds as well as amino acids and other flavor compounds offered by these "hairs."

Here is a Bai Mu Dan, showing how a white tea can offer its panoply of flavors. At the top is a leaf that has been mostly oxidized (purple) but with a tuft of yellow-green trichomes coming out of the furled mini-leaves in a bud; below is a young still-curled leaf with abundant chlorophyll and trichomes peeking out, and below that another young unfurling bud. Its greenish yellow color comes from the presence of yellow trichomes against a background of oxidized polyphenols. You may also notice the yellowish "dust"around the leaves—these are shedded trichomes. 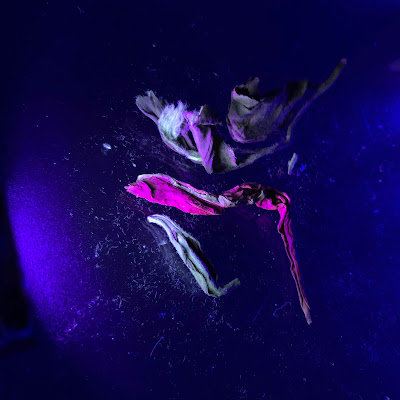 Oolongs also offer fascinating images and insights into their composition under black light. Below right is a lightly oxidized pouchong and and a highly oxidized Da Hong Pao:

The pouchong has a lot of leaves with chlorophyll and greenish leaves from the presence of trichomes against a background of red and purple.

Da Hong Pao has much more purple, showing its highly level of oxidation. In fact it is not much different from the black teas below.


Here is a Dian Hong black tea. This tea has "golden tips"—in other words, buds. In the photo below you can see that the leaves are mostly purple from the polyphenols, but there is still some chlorophyll present. The oval indicates a bud. It is not as bright a yellow as the buds shown above, because its catechins (which are abundant in buds) have been oxidized into polyphenols, but there are still some of the floral compounds that fluoresce yellow present, giving the bud a slightly orangey color.

And above is Black Magnolia, again from The Great Mississippi Tea Company. It has been more extensively oxidized than the Dian Hong, so most of the leaves are a rich dark blue-purple. Still there is at least one leaf that has retained some of its chlorophyll. At the same time, there are a couple of very young leaves that are blue-green—they have an abundance of trichomes, so the overall color is a combination of yellow and blue purple, in other words blue-green.

This post represents just a short line-up of black light images of teas, but you can already see that one can glean a lot of information about a tea and its qualities using black light. Enjoy!


Posted by Virginia at Pairteas at 8:52 AM